The Combat Sidestroke (CSS) is a variation of the Sidestroke taught to all United States Navy SWCC. It was developed by the Naval Special Warfare Basic Training Command and the Naval Special Warfare Preparatory School. The CSS is a relaxing and super-efficient swim stroke that’s a mix of Sidestroke, freestyle and breaststroke. The Combat Sidestroke allows the swimmer to swim more efficiently and reduces the body's profile in the water in order to be less visible during combat operations when surface swimming is required.

There’s no trick; no easy way to master the Combat Sidestroke. There’s no substitute for hard work and preparation. Hit the pool at least three days every week and spend a minimum of one hour each session. Your goal should be to swim using the Sidestroke up to 500 yards in under ten minutes. That preparation will give you the confidence and comfort level you need to succeed. If you discipline yourself and practice these skills, you’ll find yourself swimming faster and more efficiently.

The CSS is a long axis tactical stroke designed to be low profile, efficient, and fast. It is used to travel long distances in open water and to quickly swim through the surf zone. The CSS is performed with or without fins, and in various configurations of tactical dress and protection. The CSS is performed with a 90 degree balanced rotation. This stroke begins on the stomach then onto the side and back to the stomach. All put together it is a natural rotation, using the core to assist and create power and torque.

The Combat Sidestroke utilizes the three main fundamentals of swimming:

The Catch and Pull – Initial arm

The top arm begins and ends in the streamline position. It is a cyclical pattern. At the top of the stroke (the longest body position), the swimmer presses the palm of the hand down to begin the catch, continuing until a vertical forearm is achieved and the elbow is above the wrist.

Streamline is the body position with the least resistance that a human can create in the water. During the streamline the swimmer has the option of doing a Flutter Kick to help keep momentum moving forward.

Position the arm to allow the swimmer to pull them over an anchored position. This maximizes the surface area of the swimmers arm, while also allowing the swimmer to utilize larger muscle groups for propulsion.

Figure 1-8, Finish the Initial Pull and take a breath with head close to touching arm

Figure 1-9, Beginning of the Power Pull

Figure 1-10, Beginning of the Power Pull

The lead arm works independently from the pull arm. It is a supplementary movement to complete the swimmer’s rotation to the initial starting position, the streamline. When the pull arm is recovering and has begun moving forward from the waistline to the streamline position, the lead arm slightly presses down and makes a catch. The fingertips of the lead arm will rotate down with the palm pressing back as the elbow remains higher than the hand. This leads into a small sculling motion (this motion is almost identical to a breast stroke motion). The two hands will meet at or in front of the mask as the swimmer reaches forward, placing the swimmer in the streamline position. 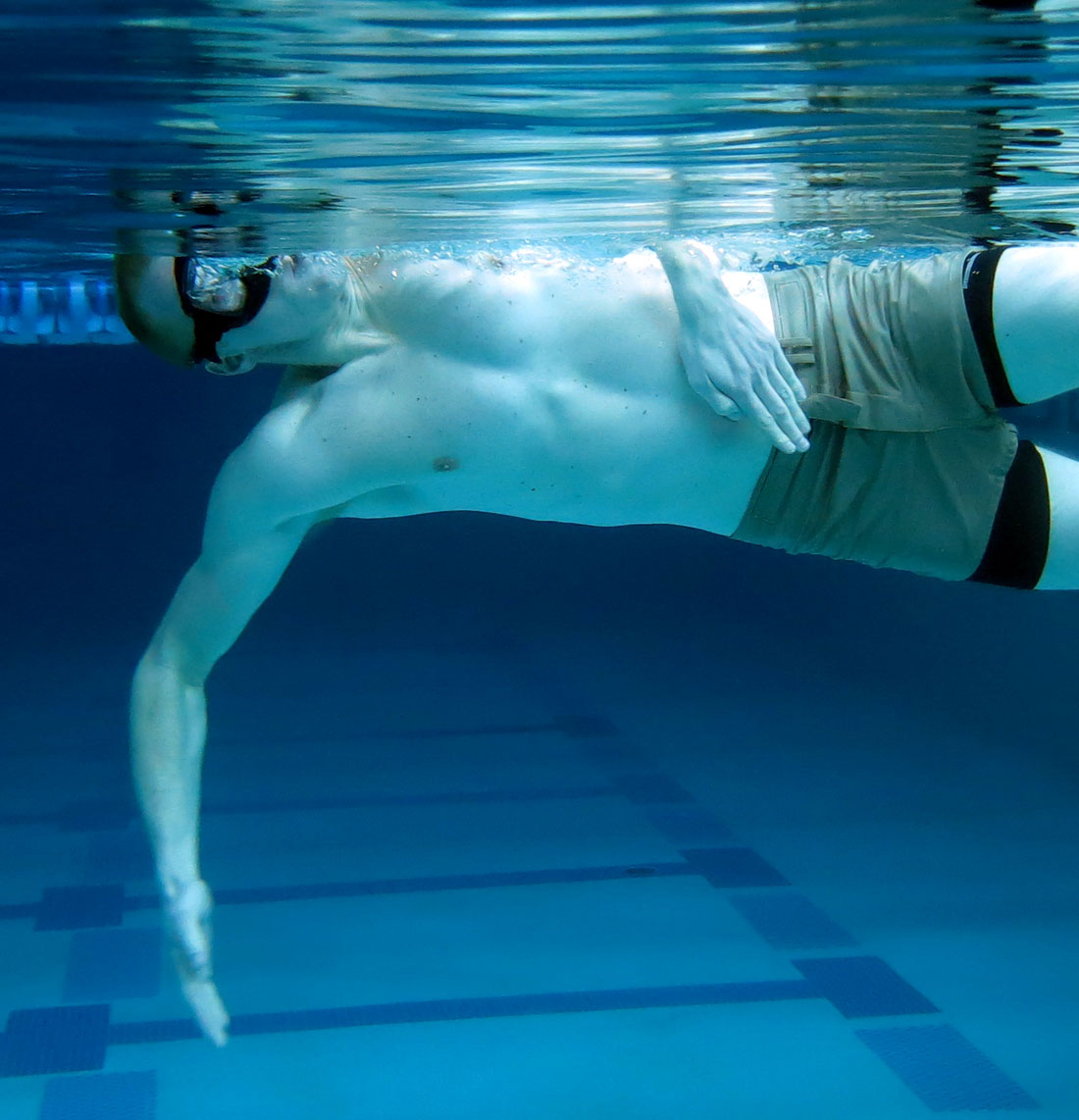 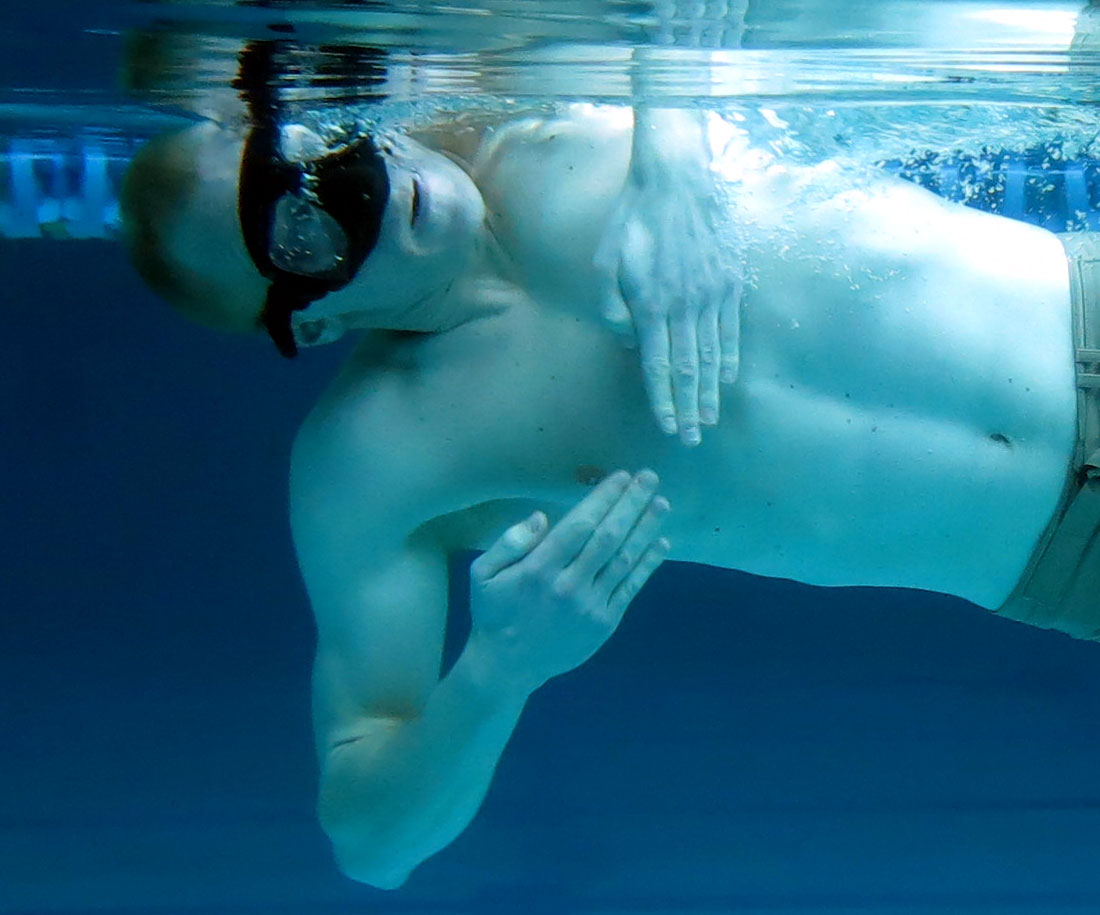 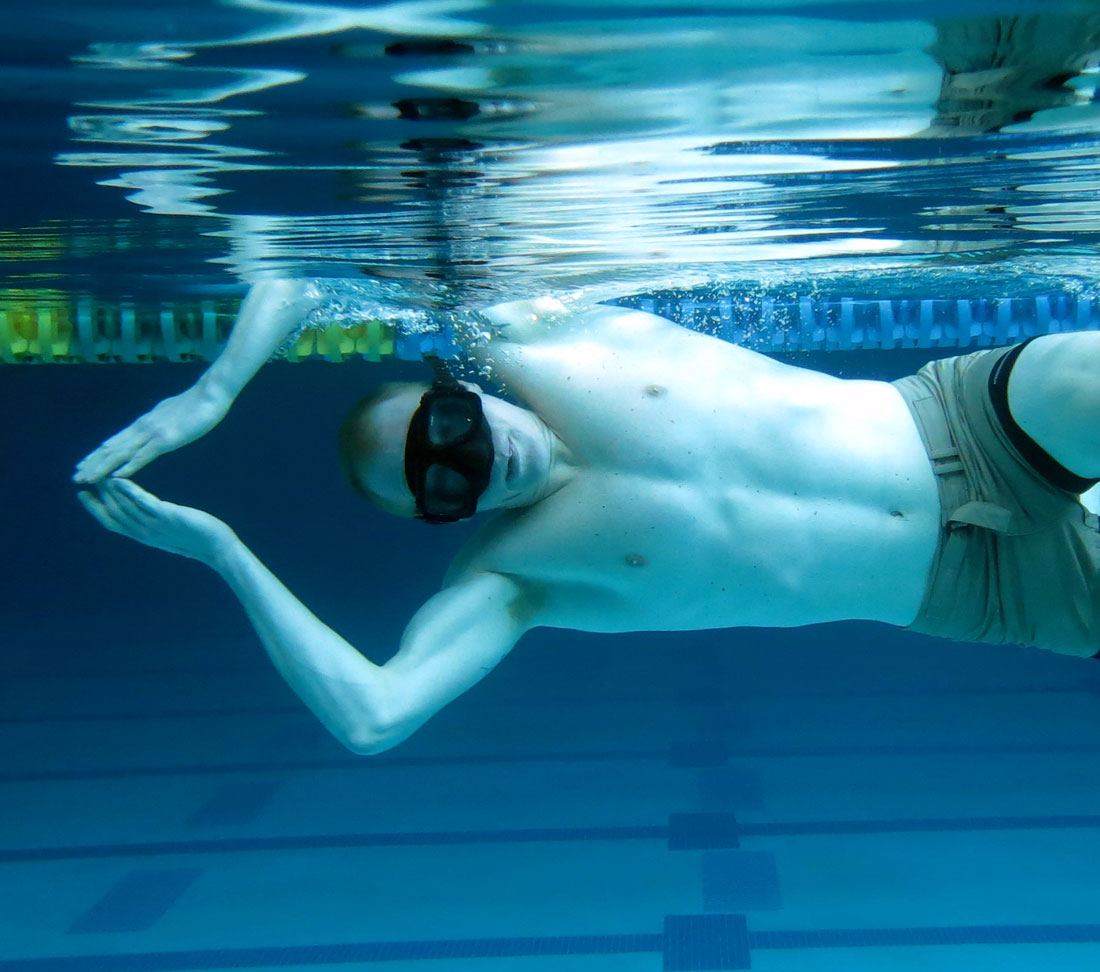 The swimmer utilizes the Scissor Kick in the Combat Sidestroke when not using fins. It may also be used in treading evolutions without fins. The Scissor kick is a very powerful kick, but has a resting period when in the streamline position. To become more efficient, the swimmer can use a Flutter Kick until the next stroke cycle begins. The legs work independently of each other. The top leg (the leg closer to the surface of the water) and the bottom leg (the leg furthest from the surface) move forward and backward respectively, and then meet back together in a streamlined position. Hence, the name of the kick, the movement resembles a pair of scissors.

The swimmer draws the knee up so there is a 90 degree angle at the hip and knee. The swimmer then extends the lower portion of the leg (from the knee to foot) forward, keeping the foot flexed toward the shin. Once the top leg is fully extended, the swimmer points the toes and squeezes the leg to initiate movement back to the starting position.

The swimmer bends the knee and kicks it backward with a flexed foot. The swimmer will then draw the foot back to the starting position meeting the top leg.

Application of the Scissor Kick

The Scissor kick is a powerful kick that also provides a moment of recovery in the glide phase of the stroke. The power of the Scissor Kick is derived from pushing the water behind the swimmer using the top of the bottom foot and the bottom of the top foot. At the end of each kick cycle, the swimmer will glide in a streamlined position, using the Flutter Kick until the next stroke cycle begins. 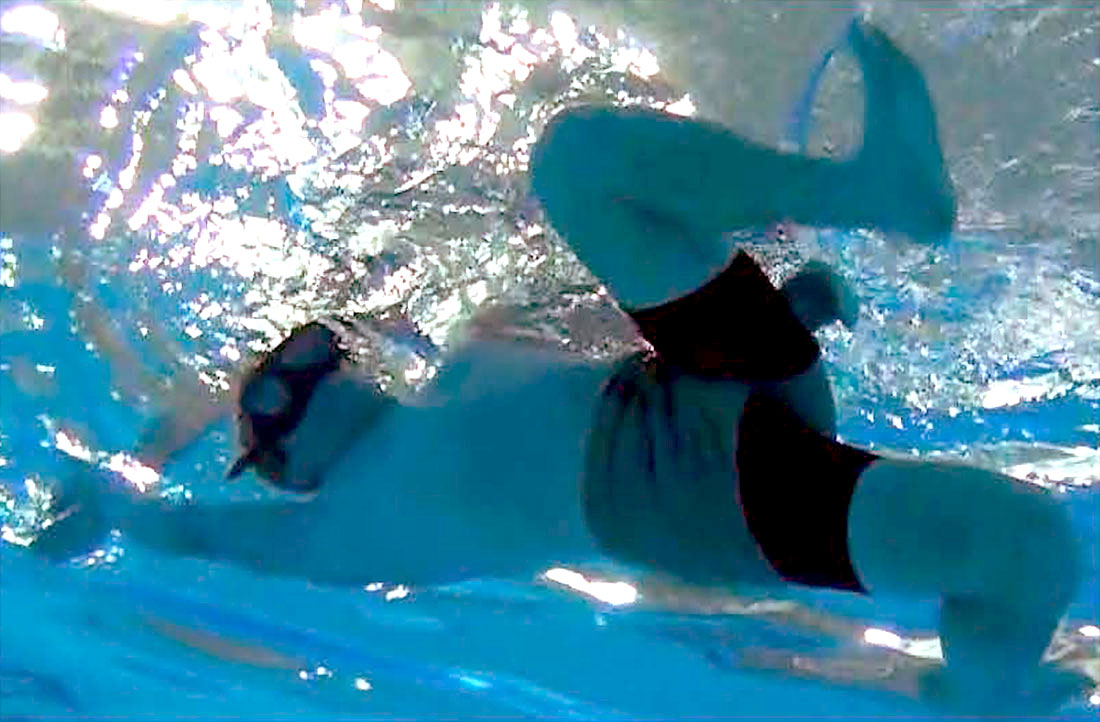 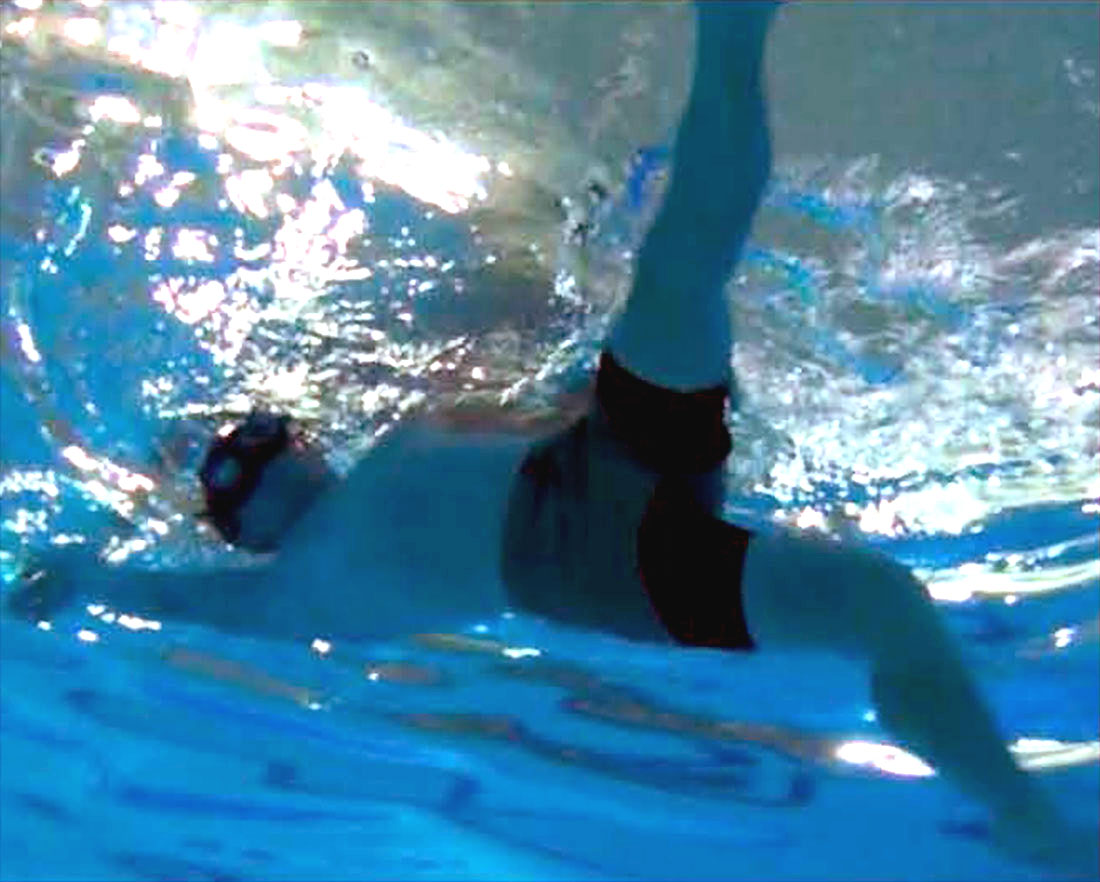 The Flutter Kick is used to propel a swimmer through the water. It is a continuous kick, resulting in a continuous forward motion. The kick is employed with or without fins. It is an integral part of CSS with fins, contributing to continuous speed and consistent power. The Flutter Kick is initiated from the hips, allowing the legs to move independently in an up and down motion. While the legs remain long and straight, this does not mean they are rigid. The swimmer must have a natural bend to the knee (a slight bend, nothing more) and relaxed ankle, though the toes must be pointed behind the swimmer. This provides as much surface area as possible to the kick, resulting in a greater displacement of water and forward motion. The swimmer will kick their legs in an up and down motion; pushing the top of the foot down, and pulling the other foot up. Without fins, the kick has a smaller range of motion and is much faster. The kick without the use of fins should occur around fifteen times every ten seconds. When fins are utilized, the rate of the kick will slow slightly, and the range of the kick will become slightly bigger. It is imperative that the swimmer does not disturb his natural body alignment with the gait of the kick.

The swimmer’s starting and stopping point of the stroke cycle is in the streamlined position. The stroke begins with the pull arm. As the swimmer pulls, the swimmer will allow the shoulder and hips to open to the appropriate direction, allowing an opportunity to breath. When the pull arm begins the recovery, the kick (either Scissor or Flutter kick), will help facilitate the body’s rotation back into the streamline position. While in this streamline position just under the surface of the water, the swimmer is encouraged to exhale slowly, and Flutter Kick, especially with the use of fins. This will assist in a continuous and consistent forward motion.

Figure 1-24, End of the Pull Phase and begin to breathe

Figure 1-25, Initiation of the Power Pull

Figure 1-26, Initiation of the Power Pull

Figure 1-27, Finishing the Recovery and starting the Scissor Kick

Figure 1-28, Finish the Scissor Kick and shoot arms in to Streamline

With a wetsuit and fins

To ensure the correct and most efficient mechanics and techniques can be used for guiding in open water swimming.

From a streamline position, palms press out slightly wider than the shoulders. Continuously press the palms against the water. Rotate the hands so that the palms pull in towards the chest, finger-tips pointing down while maintaining a high elbow position. Pulling the arms towards the chest creates forward momentum which allows the chest to be angled up, and the head in place to breathe and guide. 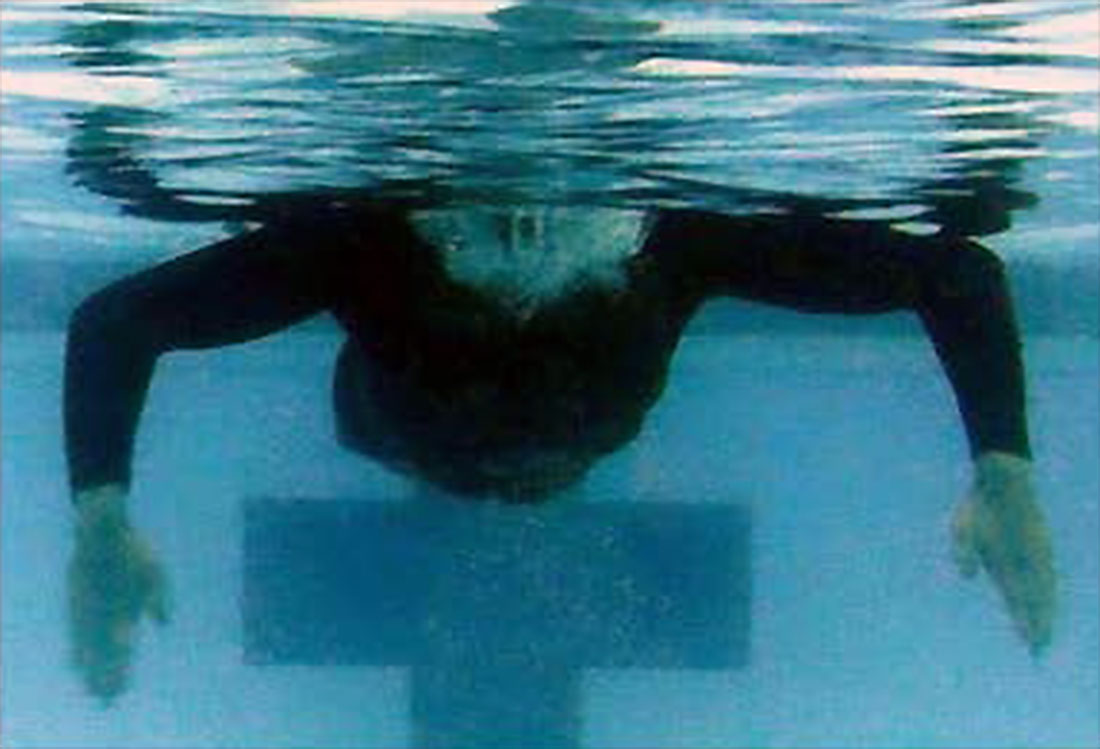 Figure 2-3, Initial breath and pull for the Breaststroke

Guiding is used to sight stationary objects and ensure traveling in a straight line during open water swimming. 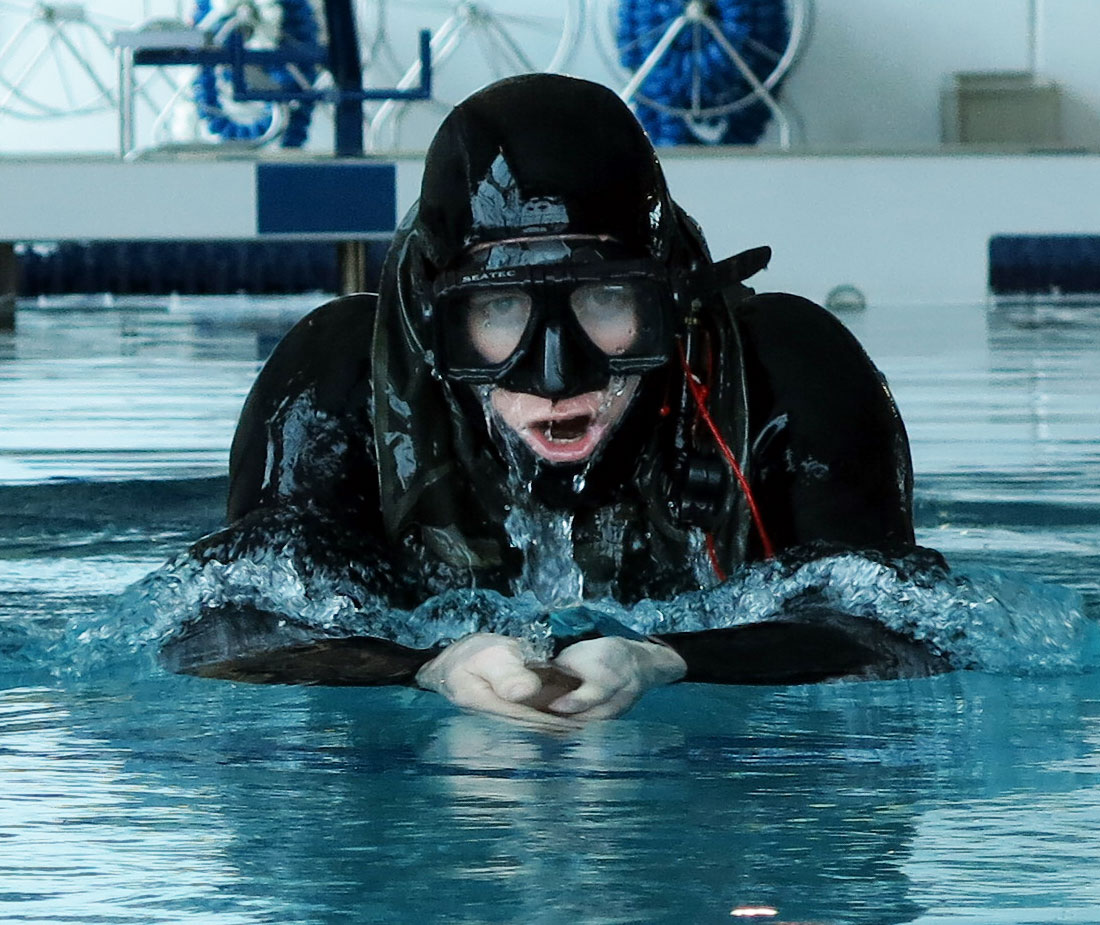 The kick used with the Guidestroke is a Dolphin Kick. As the arms move forward, both feet are used simultaneously to kick in a downward motion and drive the body below the surface of the water into the initial starting or streamline position.